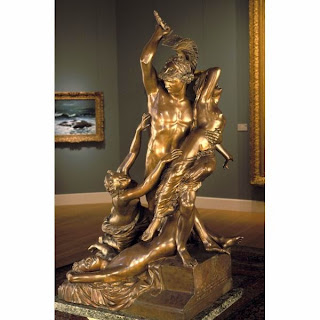 During the Trojan War, Polyxena lured the Greek hero Achilles to his death. In revenge, Achilles’s son Pyrrhus killed Polyxena’s brother and carried her off as a sacrifice, despite the protests of her mother Hecuba, the Trojan Queen.
This bronze is a version of a large marble sculpture commissioned for the Loggia de Lanzi in the center of Florence. Several ancient writers describe how Polyxena preferred death to slavery, and her story may have resonated with nineteenth-century Florentines as a symbol of resistance against the Austrian invasion of Italy.

Who is the victim in this sculpture? Is there more than one?

Is revenge a justified form of aggression or violence?

At what point does a grudge become irrelevant?